Markerr’s Population and Migration data through July shows that people are continuing to migrate toward Sunbelt markets, dominated by Florida, the Carolinas, and Texas. Meanwhile, Coastal markets like California continue to experience negative net migration. However, these markets are seeing an improvement in year-over-year growth compared to last year.

A handful of large metros that reported the greatest net migration decline in 2021 are starting to see a slowdown in negative net migration in 2022. 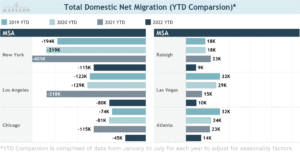 In addition, we looked at the year-over-year change of Total Population last year (including births, deaths, immigration, and migration) for all MSAs across the U.S. and found that Coastal markets lost ~599,000 people and the Sunbelt gained ~322,000 people.  Florida, the Carolinas, Texas, and cities in the Southwest dominated the top 10 markets in terms of year-over-year change. The bottom 10 markets are still heavily weighted toward dense, coastal cities.

Finally, we looked at month-over-month changes and saw growth in Sunbelt/Tertiary Markets from Coastal markets. The month-over-month percent change numbers are fairly small given the slow-moving nature of population change. We think the nominal change is an interesting way to view the data, which highlights large Sunbelt markets gaining the most population and Coastal markets losing the most population month over month.

To see our analysis of specific MSAs and their population counts, Download the Report.