2021 Rent Trends: Florida Rent Growth Comes at a Cost as Miami Dethrones NYC as the Least Affordable US Market

Markerr analyzed effective rent growth by market, occupancy trends and rent- to-income ratios for the top 100 markets in the US and found that Sunbelt markets, and Florida in particular, outperformed the rest of the country in terms of rent growth. As a result, Florida markets also saw dramatic declines in affordability, as measured by rent-to-income ratios.

For rent growth, Gateway markets such as New York, the Bay Area, and Washington, D.C. were among the worst performers last year. New York is on the path to recovery, and showed +8.7% QoQ growth to end the year -1.3% compared to the pre-Covid period.

Here are some additional findings from our national rent growth and affordability analysis:

Miami has dethroned New York as the least affordable metro in the U.S. New York, Southern California, and Florida also rank among the least affordable markets across the U.S. Several of the Florida markets experienced a massive decrease in affordability as rent growth spiked 15-20% while household income growth only rose 4.5%. 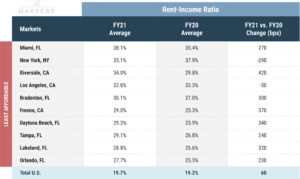 While Phoenix ranks third for effective rent growth for the year, further analysis shows three plus bedroom units rent fell 3.1% over the last quarter, which may be a result of an uptick in single-family rental supply.

In Phoenix, three plus bedroom units had the highest YoY growth in 3Q21, but experienced the most deceleration in 4Q21 with a sequential decline in growth. 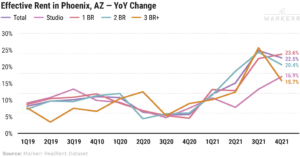 San Francisco Occupancy is Still Recovering, but Affordability is Improving

San Francisco is still recovering from Covid’s impact as illustrated by the occupancy level. Rent growth also declined during FY21 (illustrated on page 2), which contributed to better affordability. 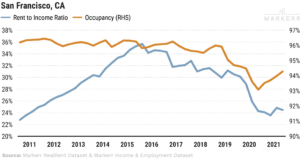